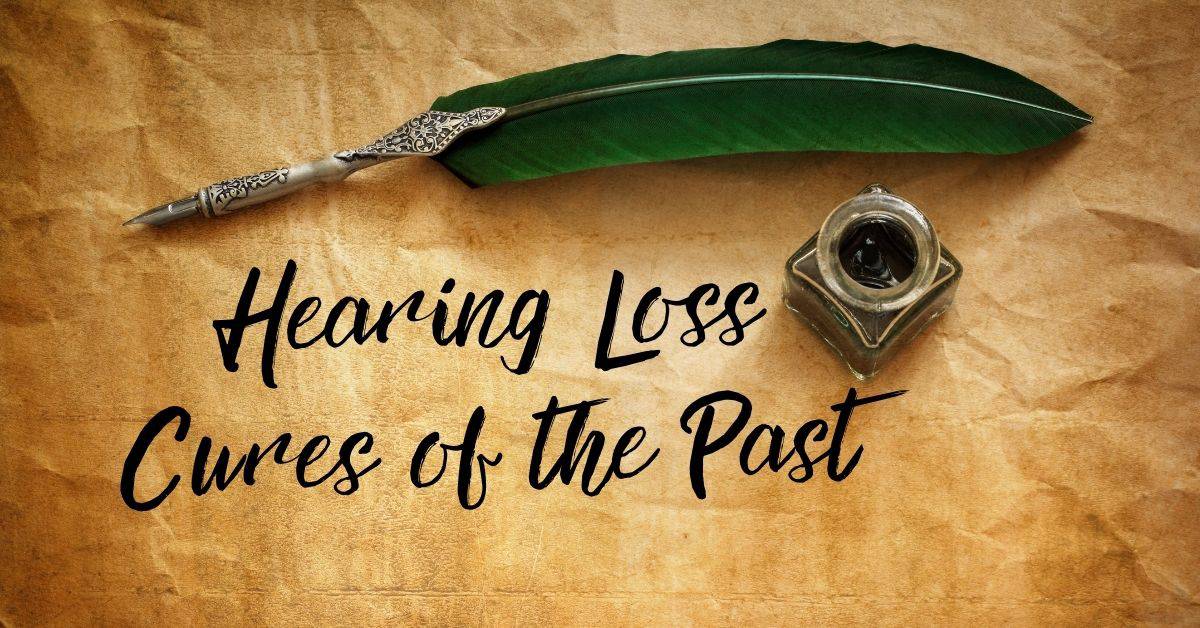 When it comes to hearing loss, we have come a long way when it comes to treatment! Not only has our understanding of the nature and causes of hearing loss developed greatly, but we have also advanced technology to a remarkable level of support.

Many of those with hearing loss in the past were left to get by as best they could with what hearing ability remained. For those who did have treatment, many of the options were insufficient, barely helpful, or, in the worst cases, causing further damage.

Let’s take a brief walk back through the history of hearing loss “cures” of the past so that we can be properly grateful for the treatment options available today!

One way to learn the details of hearing loss remedies in the past is to look at the records supplied by important historical figures. Unfortunately, the historical records of treatment attempts among average people tend to be lost, so we use the scant mentions of hearing loss treatment for the rich and the famous as a way to get a glimpse into what others with resources might have accessed.

One important example of a famous person with hearing loss was Ludwig van Beethoven. As we know, this composer had all kinds of hearing trouble, not only hearing loss but also tinnitus, according to reports. In order to support his compositional ability, many doctors tried to devise a cure, but they were largely unsuccessful.

Some of the odd methods attempted were almond oil earplugs and electric shocks to the ears. This latter tactic was called “galvanism,” and the idea was that stimulating a troubled part of the body with electricity might bring it back to function. Unfortunately, hearing loss does not respond to electricity in that way. Another ear doctor suggested that Beethoven rest his ears, but that attempt was similarly ineffective.

Another method somewhat like galvanism entailed stimulating vibration in the ears to make them respond to sound vibrations once again. Many odd tools were devised to try to vibrate the inner ear with powerful force, hoping to cause a resonant effect. Sadly, this process might have done more harm than good, using the additional vibration to overwhelm the sensitive eardrum, cochlea, and cilia in the inner ear.

As we know in other forms of early medicine, a theory of humors was sometimes believed to be evidence of health or pathology. The different forms of bile in the body were thought to be kept in balance, and doctors believed they could “let” that surplus out through a variety of methods. When it came to the ears, some believed that too much pus was the problem. They would inflict blisters on or near the ear by using different plasters. When the blisters healed, they would pus, and doctors believed in a therapeutic effect for hearing by releasing the pus. Again, this method was more likely to cause harm than good, and it certainly caused a great deal of unnecessary discomfort.

Perhaps the most common attempt to deal with hearing loss did not imagine a cure but a treatment instead. Many different contraptions were devised to provide an “artificial eardrum” when it was believed that the ear was dysfunctional. These devices included larger cones as well as tiny devices that were inserted into the inner ear, and some were even made of metal. As you might imagine, these units were ineffective at treating hearing loss, could be very painful, and often did more harm than good. By inflicting the inner ear with a foreign body, not only was hearing further muted, but bacteria and other ear infection risks were introduced.

The good news is that today’s hearing aids are remarkably effective at treating hearing loss. Not only can they reduce the sound of background noise relative to the sound of voices, but they also can isolate the sound of a speaker in a crowd.

These many technological innovations point us toward the necessity for continued research and development of hearing aid technology. Just imagine how we can build on existing innovations with even greater levels of hearing assistance in the future!

If you’ve struggled with hearing loss, contact us today to learn more about the many benefits of treatment.